skip to main | skip to sidebar

Our family talks about adoption A LOT! It seems that almost every day my girls or I mention something about their adoptions, their birthfamilies, their caregivers in China. My oldest, Zoe, aged 7, began asking questions almost as soon as she could talk, and this summer has really grappled with the loss of her birthparents. My youngest, Maya, aged 4 (turning 5 in less than 30 days now!), has not asked as many questions -- part of that is that she hears Zoe's questions and my answers, part of that is her laid-back personality.

I process things by writing about them, so I thought I'd get back to blogging to help me examine how we do adoption talk and how to do it better. I'm hoping for lots of comments about how other adoptive families are talking about adoption, too.So, if you want to listen in on our adoption talks and share your adoption talks, too, click here!

The Adoption Talk blog probably won't be as active as this blog was, but I'll post as I can!
Posted by malinda at 6:43 AM 45 comments:

Yep, I Had Brain Surgery 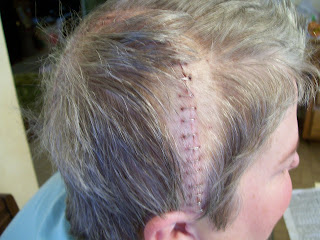 Yep, I had brain surgery – here’s a picture of my “train track” to prove it (that’s what Zoe and Maya called my Frankenstein scar!). The "train track" makes a horseshoe turn on the other side of my head. I’m sorry I haven’t posted about it – I got all of your emails and comments of concern, but at first I could only do so much and concentrated my limited resources on the girls. And then I kept meaning to post, and then time passed, and it seemed silly to post so far after the event. So I’ve been a very bad blogger, and it was inexcusable really, given how touched I was by all my readers’ expressions of concern. Then a comment came out of the blue this week asking about me, so here it is before I miss the opportunity!

I had emergency brain surgery way back in October and I’m doing GREAT – in fact, I’m recommending brain surgery for everyone! I had a subdural hematoma, which is a blood clot between the skull and the brain. The neurosurgeon said it was a small one -- about the size of his hand (which didn't sound all that small to me!). Subdurals are usually caused by some kind of head trauma, and the only thing the doctors could come up with was a pretty hard fall I had three months before in China when we were on the way to Xi'an (thank goodness none of these symptoms manifested themselves while we were in China!). Three months is pretty far outside the temporal range you’d expect for a subdural, but they think I must have bled for a while when I fell, but the bleeding stopped on its own. Then I must have done something else that caused it to re-bleed closer to showing symptoms that led to surgery.

That long delay between trauma and symptoms is what made the doctors think initially that I had some kind of brain infection – it couldn’t be a subdural, they thought, because I couldn’t report any recent head trauma. And I’d just spent five months in exotic China, where I could have been infected by who-knows-what. And I initially presented complaining about a sinus infection.

Yep, that’s what sent me to the emergency room initially – what I thought was the world’s worse sinus infection. I’d had really terrible headaches for about 2 weeks before, and spent a week throwing OTC meds at them, think it was just sinus trouble. All the pain was exactly where you’d expect it to be for a sinus attack – behind my cheekbones and above my eyes. After the OTC meds did nothing to help, I made a same-day appointment with my doctor and saw the nurse practitioner. I trotted out all my symptoms, she diagnosed sinus infection, and prescribed antibiotics, just as I expected. I also asked for pain pills – the first time I’ve ever asked for them! I have a high tolerance for pain, but this headache really hurt! Even that didn’t clue me in to this being anything other than a sinus infection – the worst headaches I’ve ever had have been sinus ones.

Anyway, I started the antibiotics right away, and started throwing up right away. Again, no cause to worry – painful sinus headaches have caused me to throw up in the past. I spent the night throwing up (thank goodness the girls were spending the night with Mimi & Grandpa so I could rest), and when Mimi saw me the next morning I was looking sufficiently ghastly that she thought we should go to the emergency room. I agreed, thinking I needed a shot of antibiotics since I couldn’t keep any down . . . .

So the girls stayed with Grandpa and Mimi took me to the nearest emergency room. The first thing the ER doctor said was that we needed a CT scan, which I thought was MAJOR overreaction – geez, a simple X-ray can diagnose a sinus infection! But that’s why they don’t let me practice medicine – the CT scan showed “something abnormal,” according to the doc. They wanted to transfer me by ambulance to a bigger hospital with a “neurology ER.” I didn’t realize it at the time – I was pretty out of it by this time, since they’d started to give me morphine – but the doctor told Mimi with exquisite bedside manners, “this is potentially fatal, you know!”

I don’t remember anything after getting loaded into the ambulance. I had a seizure in the ambulance, and another in the operating room, and was out of it for several days. I had the easy part – I slept through it all! My mom had the hard part – dealing with the doctors, making the hard decisions, contacting family and friends, taking care of the girls. I am so lucky to have a great mom!

So, I go to the emergency room on Saturday, I have surgery on Sunday, I am apparently awake and talking to people on Monday, but I don’t remember doing it. Next thing I remember was Tuesday in ICU. Wednesday I get sent to a regular room, and Thursday I get discharged – amazing!

I was still pretty out of it, even after discharge. We went to Mimi’s house for the month – it was either than or a rehab hospital, so we’re really fortunate to have Mimi close now. I mostly slept for the first week or so, but it was still great to be out of the hospital and back with the girls. Not surprisingly, this was all really hard on them. Maya didn’t want to come see me in the hospital. Last time I had a hospital stay in 2006 she wouldn’t get up on the bed or hug me or talk to me – she was just plain mad at me for weeks. After Zoe saw me in ICU on that Monday, she asked Mimi on the way home, “Is my mama dead?” Mimi said, “No, sweetie! You just talked to her, remember?” Zoe responded, “She didn’t sound like my mom.” (Zoe is pretty sensitive to voices – she knows I have a sore throat before I do, and she knew Grandpa had had a mini-stroke after talking to him on the phone, before he knew he had anything more than a headache.) She told me later that I sounded like a robot, repeating myself over and over.

Well, it’s been almost five months since surgery and we’re home and doing great. The biggest problem is that I’m not yet permitted to drive because of the seizures, but I can drive again in another month! Yippeeeeeeee! We’re fortunate to live close to the girls’ schools, so we’ve been walking to and from school. I’m taking the bus to work, which has been an adventure. And we even have a grocery store within walking distance. So all-in-all, it’s a lot like being back in China! The girls have been real troupers, but it is harder to walk here than in China – though their schools are closer than in China, at least there we didn’t have to walk right by the mini-van in the garage to get to school! And in China, everyone was walking, so the girls couldn’t feel aggrieved about walking like they can here. Thank goodness we got used to getting stared at in China, because walking gets us stared at here. No one in Texas walks for the purpose of transportation!

Thanks to all of you who have expressed concern, who prayed for us, who’ve been checking the blog for updates. Finally, here it is!

This will also be the official last post to the Xiamen Adventure blog. We arrived in China a little over a year ago this month, and we’ve now been home longer than we were there. It was the adventure of a lifetime – but hopefully, not our last adventure in China. We want to go back, and we want to stay longer next time. Maybe soon there will be another China Adventure blog. Thanks for coming along for our Xiamen Adventure!

Take a look at The Lewis Family Goes to China. They've got a passel of boys and one girl adopted from China.
Posted by malinda at 1:51 PM No comments:

Having told you Maya’s reaction to the Jesus portrait, I have to tell a portrait story about Zoe, too.

So fired up, in fact, that she kept up a running conversation about it as we walked toward it, and soon the conversation degenerated into a song with lyrics something like, “I wanna see Mao, Mao, Mao-ey, Mao-ey, Mao. . . .” I was beginning to wonder if we’d get arrested for disrespect or heresy or something!

There are some nutty conspiracy theorists out there who decry Americans adopting babies from China, because they believe they’ve all been implanted with microchips that the Chinese will use to “activate” this stealth army when the kids reach adulthood. For just a nanosecond there, I had to wonder . . . . [Not really, but can you imagine what one of those whack jobs would have thought if they’d heard 4-year-old Zoe singing Mao’s praises?!!]
Posted by malinda at 11:00 AM 2 comments:

The Xiamen adventure continues – I’m thrilled to be able to give you a few new blogs to follow expat families in Xiamen.

One of the families is the Fulbright family who will be in our Apartment 301 in the Foreign Scholars Guesthouse. It’ll be so great to see whether their experiences will be the same or different from ours. I feel nostalgic already! They’ll be blogging at “Our Year in Xiamen.”

The second family is blogging at “China Diary.” The dad is already in Xiamen and the rest of the family will be heading there in 2008. They’re planning to home-school their kids.

And then you can check out “G.A.C.E. in China,” a family with two kids who are living and working in Kunming. She is our own commenter, A.M.B.A. in MI.
Posted by malinda at 10:29 AM 11 comments:

According to the Blogger dashboard, my last post was my 200th. When I first started the blog, I was worried that I'd run out of things to write about. Guess it didn't happen!
Posted by malinda at 10:26 AM 96 comments:

malinda
Back in Fort Worth, Texas, United States 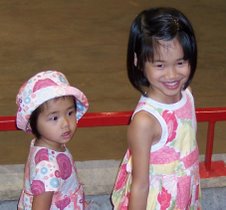